Elastic energy propagates through the earth in different ways and at different speeds. The main wave types are body waves (P and S waves) and surface waves (Rayleigh and Love waves). Whereas body waves travel through a medium, surface waves travel along surfaces and interfaces. Each wave has a distinct particle motion, elastic deformation and speed of propagation. The speed of propagation depends upon the elastic properties and the density of the medium. Density has been discussed already and will not be presented again here. 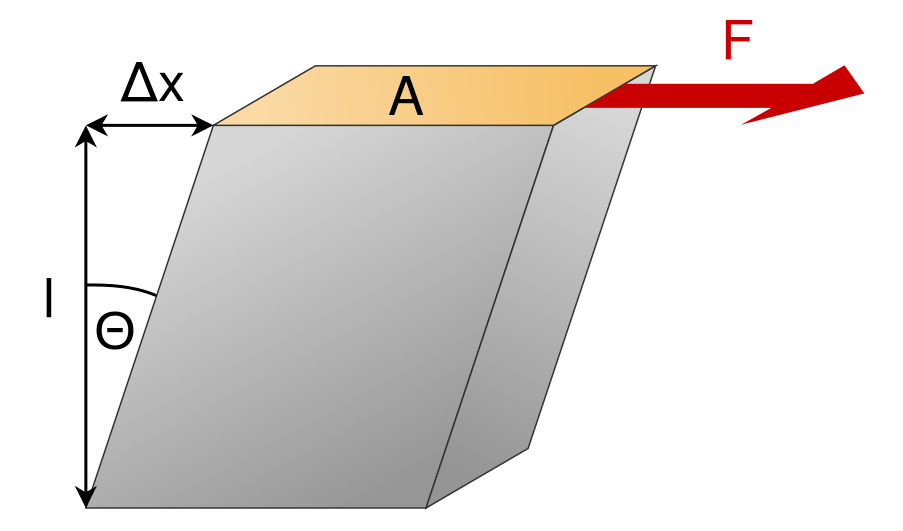 Stress is defined as the external force applied to a body divided by the cross-sectional area of the body over which the force is applied. There are two main types of stress: normal stress and shear stress. Normal stress is perpendicular to the surface of an object whereas shear stresses are tangential. Normal stresses can be further divided into compressive and tensile stresses. Compressive, tensile and shear stress are illustrated in the figure to the right. Stress is a force per unit area and has SI units units of N/m \(\! ^2\).

Strain defines the deformation of a material under the influence of an applied stress. When a body is stressed it may undergo a change in size and shape. If this occurs, the body is said to be “strained”. For relatively small strains, the body will recover its original shape and volume when the stress is removed. This is known as “elastic strain”. If the strain is too large, then the body deforms plastically and may even fracture. Unlike elastic strain, plastic strain permanently alters the shape of the body. 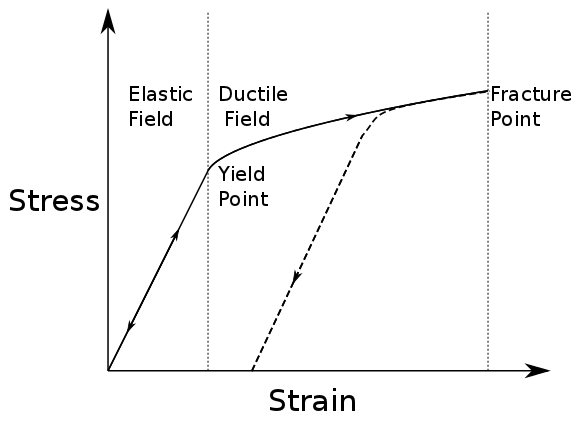 The figure below plots how strain (horizontal axis) accumulates as stress (vertical axis) is applied. While behaviour is elastic, increasing or decreasing the stress does nothing to permanently change the material. Once stress is sufficient to make material behave plastically, reducing the stress results in reduced strain along a different path on the graph. Once the fracture point is reached, the strain is released by breaking.

In this course—and for the vast majority of seismic analysis—we will assume that seismic waves cause the earth to undergo linear elastic deformation. In other words, we assume a linear relationship between stress and strain. This is known as Hooke’s law. For a given material, that relationship can be characterized by a set of two independent material parameters that characterizes the strains produced as a result of various stresses. These parameters are intrinsic properties of the material. The parameters, or elastic moduli, can be defined in several ways and are also known as Lamé parameters. The most common set of parameters in seismology are the bulk and shear moduli. Young’s modulus and Poisson’s ratio are also commonly used. We describe these quantities here. 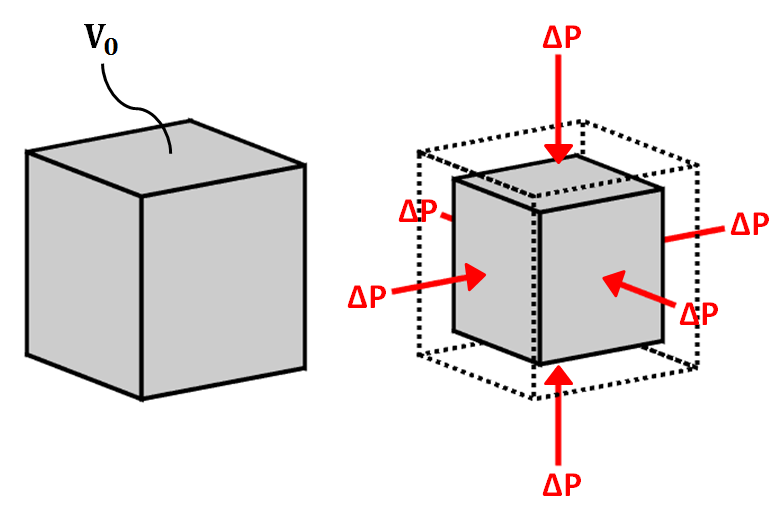 where \(V_0\) is the original volume of material, \(\Delta P\) represents the pressure being applied to the material and \(\Delta V\) is the resulting change in volume.

where the shear stress is represented by a force (\(F\)) per unit area (\(A\)). Shear strain represents a tangent angle between the shear deformation (\(\Delta x\)) of the material along the direction of force and the perpendicular dimension (\(l\)) of the block of material. 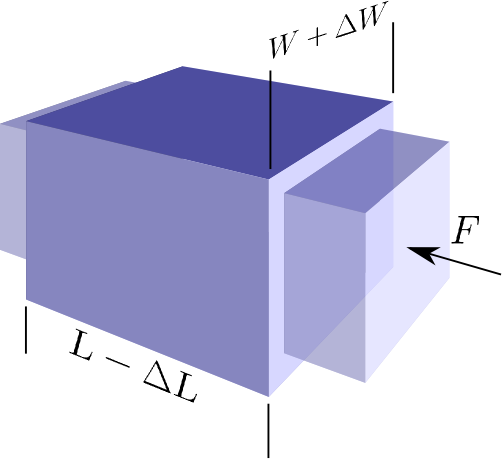 Young’s modulus is defined to be the ratio of longitudinal normal stress to longitudinal normal strain. Consider the rectangular prism shown below with square cross-sectional area \(A = W^2\) and length \(L\). A force \(F\) applied normal to the axis of the prism, distributed over the cross-sectional area, will generate a normal stress of \(P = F/A\). If this stress generates a reduction in length of the prism of \(\Delta L\), the Young’s modulus of the prism material is

Note that it is possible for \(\sigma\) to be zero. The decrease in length could be compensated for by decrease in pore space for example. Cork is an example of such a material.

In addition to the bulk modulus, shear modulus, Young’s modulus and Poisson’s ratio, there are a multitude elastic parameters which can be used in pairs to define Hooke’s law. We will not cover the entire range of parameters in this course. A table showing the relationships between the various parameter pairs can be found here.

In seismology, there are two fundamental types of body waves: pressure waves (“P-waves”) and shear-waves (“S-waves”).

S-waves are shear waves in which the particle motion is perpendicular to the direction of wave propagation. The shearing action and the propagation of the wave can be seen in the diagram on the right [1]. Cells change shape but do not change volume when they come in contact with the wave. When there is a reference interface, such as the surface of the earth, S-waves are labelled as SH (horizontal shear) and/or SV (vertical shear). This is used to indicate the direction of particle motion with respect to the surface. In isotropic media, SH and SV waves travel at the same speed. The S-wave velocity can be related to the elastic properties of the medium by the following expression:

In seismology, there are two fundamental types of surface waves: Rayleigh waves and Love waves.

Symbols used to define P-wave and S-wave velocities, as well as the elastic properties on which they depend, are summarized in the following table: 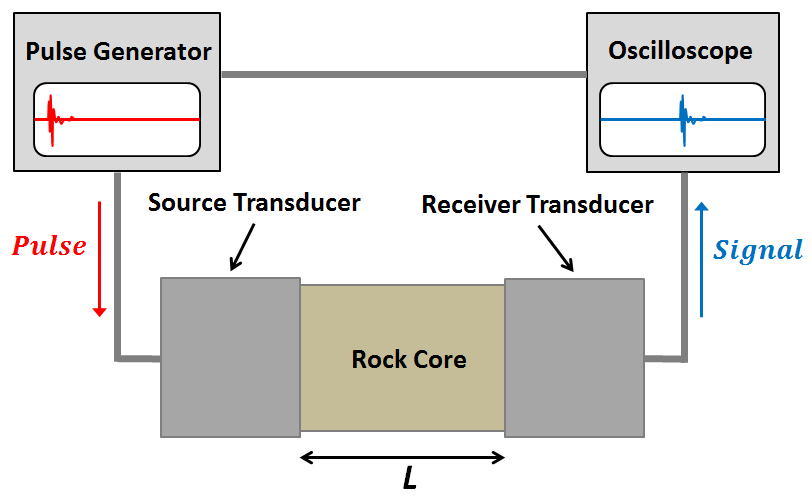 The measurement apparatus works by generating a short current pulse. As a result of the incoming current pulse, materials within the source transducer undergo elastic deformation. This elastic deformation is then transferred to the rock core where it propagates as elastic waves. On the other side of the rock, a receiver transducer registers the elastic waves and transforms the corresponding energy back into a current signal. This current signal is then measured by an oscilloscope.

Using the oscilloscope, we can determine the amount of time (\(\Delta t\)) it took for the elastic waves to propagate through the rock core. Given that we know the length of the rock core (\(L\)), the seismic velocity is given by:

P-waves and S-waves travel at different speeds depending on the media they are propagating through; P-waves travel faster than S-waves. P-waves are able to propagate through solids and fluids, however, S-waves can only propagate through solid materials. Given that there are so many factors which impact the velocity of seismic waves, it is impossible to assign a single value to a particular rock type. Therefore, the seismic velocities of rocks are generally defined over a range. The range of P-wave and S-wave velocities for common materials are shown below:

The mineralogy and structure of a rock determines its bulk modulus, shear modulus and density; which define the P-wave and S-wave velocities. In general, igneous, metamorphic, carbonate and anhydrite rocks have relatively large seismic velocities compared to soils and most sedimentary rocks. This is because the aforementioned rocks only deform under extreme compressional and shear stresses, and are therefore characterized by larger bulk and shear moduli. In sandstones and soils, clays have a tendency to present in load-bearing positions. As a result, seismic velocities are heavily influenced by clay content. Even in small abundances, clays have been shown to significantly reduce the seismic velocity by reducing the shear modulus.

The most significant factor affecting seismic wave velocities is porosity. In the above table, we saw that seismic waves travel faster in solids than they do in fluids; with S-waves being unable to propagate through fluids. Thus as the porosity of a rock increases, both the P-wave and S-wave velocities will decrease. This is because seismic wave propagation becomes less efficient when forced through a fluid. Although it will not be explained here, the pore structure also plays an important role in reducing the efficiency of seismic wave propagation within rocks.

Pore fluid determines the elastic properties of the pore space. Since P-wave velocity is larger in water and oil than it is in air, the P-wave velocity of a rock is less impacted by porosity if the pore-space is saturated. Additionally, the S-wave velocity has been shown to depend on the density of the pore fluid. As a result, P-wave and S-wave velocities increase as pore saturation increases. This can be described in a rudimentary manner using Wyllie’s equation:

Lithification describes the geological process in which unconsolidated sediments become consolidated through compaction and cementation. When subject to tectonic compression, or under the weight of overlying geological units, sediments and soils become compacted. This compaction reduces the pore-space which ultimately increases the P-wave and S-wave velocities. As a result, the seismic velocities of sedimentary units frequently increase with depth.

Cementation refers to chemical fluid processes in which pore space is replaced by a precipitate and mineral grains become fused to one another. Cementation increases the incompressibility and rigidity of the sedimentary rock, thus increasing its bulk and shear moduli. Ultimately, this process is responsible for increasing the seismic velocities.