Chargeability is a physical property related to conductivity. As we learned previously, ionic charges within a rock’s pore water begin to move under the influence of an electric field, resulting in electrical current. However, some of the pore ions do not move uninhibited through the rock and begin to accumulate at impermeable boundaries. This build-up of ionic charges is commonly referred to as induced polarization (IP), as it is responsible for generating electric dipole moments within the rock. We use chargeability to characterize the formation and strength of the induced polarization within a rock, under the influence of an electric field.

The physical explanation for causes of chargeabilty are complex and not completely understood. Certainly the effects are dependent upon the microscopic nature the material and specifically upon the surface to volume ratio of pore material and the types of fluids in the rock. The two images below offer some insight into the complexity.

Despite the complexity are two primary phenomenological mechanisms which are insightful in characterizing the chargeable behaviour of rocks: membrane polarization and electrode polarization.

Membrane polarization occurs when the pore space narrows to a within several ion widths.

Because ionic charges cannot be forced through the pore throat, they accumulate on either side when an electric field is applied; with positive charges accumulating on one side of the pore throat and negative charges accumulating on the other. The accumulation of charges eventually stops because the electric fields from the blocked charges becomes large enough that it prevents other ions of the same sign from joining the group.

The net separation of positive and negative charges across narrow pore spaces generates a set of electric dipole moments which is ultimately responsible for the voltages measured in induced polarization survey.

The attraction of the ions to the surface forms a primary layer of fixed ionic charges, followed by a secondary diffuse layer of opposing charges. This is known as an electric double layer.

Each electric double layer results in an electric dipole moment which contributes towards the induced polarization within the rock.

Effects of IP on Geophysical Measurements¶

To demonstrate the effects of induced polarization on geophysical measurements, consider a specific example where a current generator, hooked to the ground as in a DC survey, is turned on. At some location, the electric potential (\(V\)) is measured. In non-chargeable rocks, an instantaneous increase in the measured potential occurs when the source is switched on. When the source is switched off, the current through the Earth returns immediately to zero and so is the measured potential. This is illustrated in the figure below. 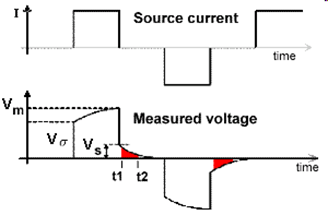 where \(V_s\) is the amplitude of the over-voltage and \(\tau\) is a constant which determines the rate at which the induced polarization forms.

When the source is switched off, there is an instantaneous drop in the measured potential equal to \(V_\sigma\). Subsequently, the accumulated charges begin to diffuse, resulting in a measured potential which decays according to:

The intrinsic chargeability for materials is rarely provided in tables. Rather, numbers based upon laboratory measurements of some characteristic of the induced polarization response is provided. Those measurements can be in time or frequency and the units of the “chargeability” are inherited from the data. We outline below:

Chargeability, \(M\), is essentially the red area under the decay curve, normalized by the source voltage.

Numerical values for the integrated chargeability are typically given in ms. 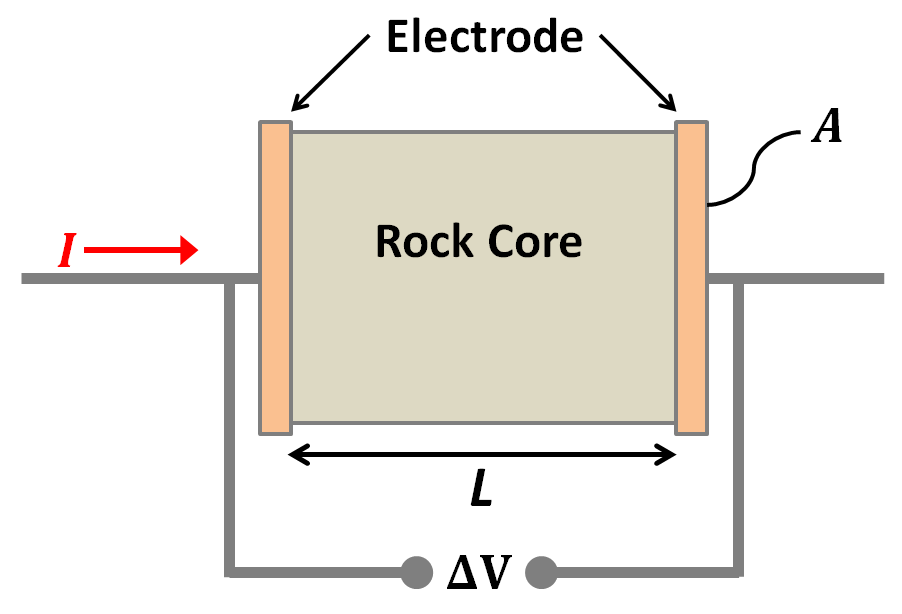 If the voltage version is used, the Frequency Effect (FE) can easily be converted to a percent frequency effect by multiplying by 100.

Relating the four types of data¶

The different IP responses all result from the build up of polarizing charges, but they do not produce the same numbers. In fact, the units of the various measurements are different. Nevertheless, the following approximate rule of thumb allows conversion between the different data sets:

For integrated and intrinsic chargeability measurements, a core sample is taken from the rock. The core sample is then placed in a sample holder between two copper/graphite electrodes where it acts as an impedence element for a circuit.

For integrated chargeability measurements, a source is used to drive direct current (\(I\)) through the rock core. During the on-time, the voltage (\(V_m\)) is measured across the sample. Next, the source is switched off. During the off-time, the potential across the rock is measured as it decays. The off-time measurements are used to define the discharge curve for the sample, which is then used to obtain the integrated chargeability according to:

For practical measurements, we do not integrate over the entire discharge curve. Instead, a finite interval of integration is chosen. For example, the Newmont standard chargeability integrates from t = 0.15 s to 1.1 s.

Intrinsic chargeability measurements are very similar to conductivity/resistivity measurements. In this case, the source is used to drive alternating current (\(I\)) through the core sample. By measuring the voltage drop (\(\Delta V\)) accross the length of the sample, Ohm’s law can be used to determine the circuit impedence (\(Z\)) caused by the rock:

In chargeable rocks, the measured voltage drop depends on the frequency of the alternating current. So in order to characterize the resistive properties of the rock, we need to determine the impedence over a spectrum of frequencies.

The resistivity of the sample at each frequency can be obtained from the impedence, the length of the core (\(L\)) and its cross-sectional area (\(A\)) using Pouillet’s law:

In order to characterize the rock’s chargeable properties, we fit the experimentally acquired resistivity values to a mathematical model (illstrated below). A well-established model for explaining the resistivities of chargeable rocks is the Cole-Cole model:

where \(\rho_0\) is the DC resistivity and \(\eta\) is the intrinsic chargeability. Parameters \(\tau\) and \(C\) define the rate at which ionic charges accumulate when an electric field is applied.

Assuming \(C=1\), \(\tau\) defines the exponential decay in voltage during the off-time measurements (see earlier). The conductivity of the rock can be obtained by taking the reciprocal of the complex resistivity:

Tables (from Telford et al, 1976) provide a very general guide to the integrated chargeabilities of materials. Because different intervals of integration \([t_1,t_2]\) are used for each table, chargeability values cannot be compared between tables. However, we can infer several things from these tables:

Clays have a tendancy to partially block the path which ions take through the rock’s pore water. Upon application of an electric potential, positive charge carriers pass easily, while negative carriers accumulate. This results in an “ion-selective” membrane polarization. Clays represent a dominant source of induced polarization in unmineralized sedimentary rocks.

A surplus of both cations and anions occurs at one end of the membrane, while a deficiency occurs at the other end. The reduction of mobility is most obvious at frequencies slower than the diffusion time of ions between adjacent membrane zones; i.e. slower than around 0.1 Hz. Conductivity increases at higher frequencies.

The induced polarization within a rock depends on having a mechanism for accumulating ionic charges. It also depends on the salinity of the pore water; i.e. the concentration of ions within the pore water. As the pore-water salinity increases, so does the capacity of the rock to support a build-up of ionic charges. This results in an increases chargeability for the rock.