There are four techniques for observing chargeability: two using a charging current that is turned abruptly off so that discharging can be observed in the time domain, and two in which the dispersive nature (or effect as a function of frequency) of the phenomenon is observed in the frequency domain.

Consider the experiment illustrated in the following figure. Current, \(I\), is injected into the ground at the source electrodes and voltage, \(V\), is measured at the potential electrodes. The source is DC (direct current) in the sense that when it is on, there is no variation. However, in this case it is turned on and off with a duty cycle as shown above. Two methods of measuring chargeability in the time domain are described below.

Chargeability, \(M\), is essentially the red area under the decay curve, normalized by the source voltage.

Numerical values for the integrated chargeability are typically given in ms.

For practical measurements, we do not integrate over the entire discharge curve. Instead, a finite interval of integration is chosen. For example, the Newmont standard chargeability integrates from t = 0.15 s to 1.1 s.

If the voltage version is used, the Frequency Effect (FE) can easily be converted to a percent frequency effect by multiplying by 100.

Relating the four types of data¶

The different IP responses all result from the build up of polarizing charges, but they do not produce the same numbers. In fact, the units of the various measurements are different. Nevertheless, the following approximate rule of thumb allows conversion between the different data sets:

The source is here an on-off duty cycle. As noted above, when time domain IP is recorded, chargeability is measured as the area under the decay curve normalized by “primary” voltage \(V_P\), using

The \(t_1\) and \(t_2\) times may be any limits within the off-time, and there are not really any standards, so comparison of different surveys can be difficult.

Source (input) current is a square wave with 50% duty cycle (equal on and off times) as per resistivity (repeated cycles of +on, off, -on, off). The use of positive and negative cycles in transmitter current is very important for time-domain IP work. The correct area under the decay curve will be measured only if the potential decays exactly to zero. This will not occur when there is a superimposed spontaneous potential (SP), which is usually the case. If only one polarity was used, the inevitable SP could not be detected and removed. Recording both positive and negative cycles allows the “off-time” potential (i.e. voltages recorded when the transmitter is off) to be estimated, and any non-zero component removed.

Many instruments record measured voltage, \(V_P\), just before the transmitter is turned off, and then again 10 times while voltages decay during the off times. The results can then provide a calculated chargeability and an estimated spontaneous potential. The adjacent figure illustrates each measured parameter. Note that if the transmitter is not on for a long enough time, \(V_P\) will be measured before the charging time is finished, resulting in a voltage that is smaller than the actual \(V_P\).

Other instruments use alternative time windows, and some newer instruments digitize the whole waveform, but the fundamental concepts are the same for all time domain systems.

The source is here a sinusoid.

The percent frequency effect was defined above as either

When the phase of voltage (\(\Delta V\)) with respect to input current ( I ) is measured directly, the impedance Z of the ground at different frequencies (\(\omega\)) can be determined based on the material. This requires careful synchronization between the receiver and the transmitter.

In chargeable rocks, the measured voltage depends on the frequency of the alternating current. So in order to characterize the resistive properties of the rock, we need to determine the impedence over a spectrum of frequencies.

In order to characterize the ground’s chargeable properties, we fit the experimentally acquired resistivity values to a mathematical model (illstrated below). A well-established model for explaining the resistivities of chargeable rocks is the Cole-Cole model:

where \(\rho_0\) is the DC resistivity and \(\eta\) is the intrinsic chargeability. Parameters \(\tau\) and \(C\) define the rate at which ionic charges accumulate when an electric field is applied.

Assuming \(C=1\), \(\tau\) defines the exponential decay in voltage during the off-time measurements (see earlier). The conductivity of the rock can be obtained by taking the reciprocal of the complex resistivity:

The data sets shown (below) were gathered simultaneously at the Century Deposit in Australia. Clearly they are exhibiting responses to different materials within the ground. However, this presentation of the raw data (plots called pseudosections) is deceptive, and does not represent true distribution of material properties in the ground. After inverting these data, the resulting resistivity model reveals information about rocks overlying the deposit, while the resulting chargeability model shows the deposit itself and underlying shale units.

The Sample Core Induced Polarization (SCIP) Tester from GDD Inc. is a portative instruements that allows to estimate the resistivity and the IP response of core samples. 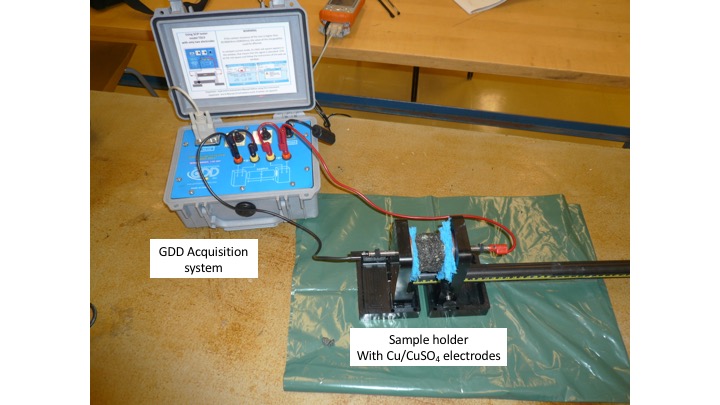 Smith, M.J., 1980, Comparison of induced polarization measurements over the Elura orebody, The Geophysics of the Elura Orebody, Cobar NSW, ASEG, 1980, 77-80.