Modern portable land-based instruments include automated leveling, data recording, and logging, but essentially their sensors are based upon variations of a mass on a spring. If the force on a spring is to be measured accurately to tell us geologically useful information about gravity, then changes in spring length, \(ds\), must be measured with a precision of 1:109. Therefore, some form of “amplification” is required. A complete discussion of instruments is beyond the scope of these notes, but some of the characteristics of the most common instruments are listed here. 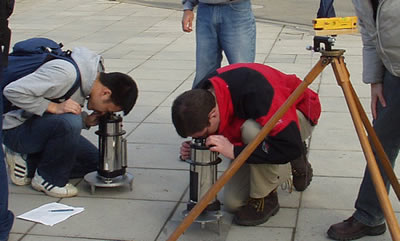 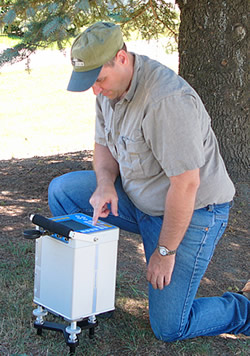 There are also several organizations supplying instruments and services for marine and airborne surveys, and for measuring gravity gradients, but these advanced topics are beyond the scope of this introduction, except for the comments on the associated page that discusses gravity gradients.

The following points provide an outline for how data are acquired for common ground-based surveys.

The following are some comments on positioning for gravity surveying:

The goal of data reduction is to remove the known effects caused by predictable features that are not part of the “target.” The remaining anomaly is then interpreted in terms of sub-surface variations in density. Each known effect is removed from observed data. First the various “corrections” are described, and then the presentation options are listed.

The adjacent figure shows the effects of each correction for a short line surveyed in Vancouver, BC. Raw data after correcting for drift, and each of the correction factors are shown. Final interpretations would normally be made from the Bouguer anomaly graph (red).

Just what is plotted as a profile or map depends upon which corrections are applied. Commonly plotted quantities are as follows:

Note that 2D data sets usually require gridding, which is a whole story unto itself.