Here, we look at some real examples of GPR surveys and try to interpret the radargram data. Although we are focusing on the interpretation of data, it will be contained within the 7-step framework.

Things to Keep in Mind¶

When attempting to interpret radargram data, here are a few things to keep in mind. Try to consider these things when examining the radargram below.

Setup: Real estate transactions regularly create the need for an environmental site assessment. Confirming the presence or absence of underground storage tanks (USTs) can be a critical factor in contract closing.

Physical Properties: Storage tanks have a large conductivity. These will act as strong reflectors of GPR signals.

Survey: Survey line are done perpendicular to the known orientation of the storage tanks. A zero offset survey was used.

Data: GPR data were collected along several profile lines. These were used to generate radargrams.

Processing: An arrival time to depth conversion was done in order to approximate the depth to the storage tanks. The radargrams for several profile lines were interpolated in order to generate a 3D image.

Interpretation: From the radargram and 3D interpolated image, we can easily see five storage tanks buried at a depth of 3.5 ft (1 metre). In the radargram, the signatures from the pipes are hyperbolic. Below the tanks, we can see two tank beds. The goal of the tank bed is to ensure that any leakage stays contained. Because the storage tanks themselves are such strong reflectors, we do not see the reflection of the tank beds for certain Tx-Rx positions.

Synthesis: This survey was successful in locating the buried storage tanks at a potential building site.

Setup: Bog material in raised bogs are being used to energy consumption. We would like to map the peat bogs thickness over a 35,000 Ha region.

Physical Properties: Peat is a porous carbon material with large water content (they need to dry it before using). Region below is listed as lake deposits. Possibly a difference is water content and texture and this may provide a difference in dielectric permittivity.

Data: Profiles collected every 60 m and plotted as distance-time sections. 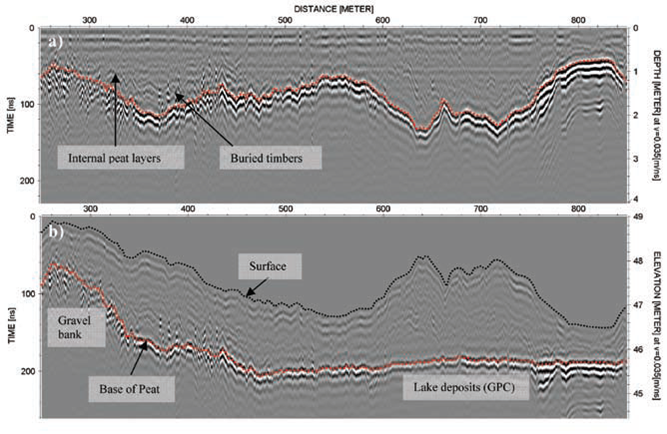 Interpretation: As we can see at roughly 100 ns +/- 50 ns (a), there is well-established interface corresponding to the bottom of the peat bed. At earlier times, we see reflected signals from the internal layered structure of the peat beds as well. We also see localized features which are thought to be caused by buried timbers. After the topographic correction (b), we see an embankment on the left side of the radargram. The contrast in physical properties here is smaller, thus we do not see the reflection as strongly.

Synthesis: In various places, a peat augur (borehole device) was used to calibrate the data and verify the inferred thickness of the peat layer. As a result, our interpretation of the data was correct and the GPR survey was successful.

Setup: Water is a serious problem for potash mines, as it can dissolve the rock and decrease structural integrity. The goal of this survey was to map the location of intruding water and locate its source.

Survey: GPR profiles were collected along the lengths of mine shafts using a common offset configuration.

Data: Radargrams along several profiles within mine shafts.

Processing: By assuming a propagation velocity of 0.13 m/ns (approximately known for potash), the two-way travel time was converted an apparent depth/distance.

Fig. 136 Radargram showing reflected signal corresponding to water and ringing from proximal infrastructure. Notice the radargram is upside down. Things nearer to the source and receiver are plotted near the bottom.

Interpretation: On the radargram, we see a strong reflected signal corresponding to the water which is percolating through the potash. We see that the water is approximately 6 m away from the wave of the mine shaft. The resolution is not high enough to determine the thickness of the water saturated potash. However, we see that it is delineated in some areas and that the source of the water is likely on the right of the profile. On the left side of the GPR profile, we see ringing causes by infrastructure.

Synthesis: In this case, the results of the GPR survey were correlated with the results from a DC resistivity survey (taught later in the course). Boreholes also confirmed the inferred location of the water. Ultimately, we were successful in locating the water and determining its source using GPR in conjunction with other methods.

Physical Properties In this case, the contrast in physical properties is between the host rock and items buried along with human remains. We expect that objects buried in the ground will act as point reflectors for the GPR signal.

Data: Radargram along a 20 m profile.

Processing: By using the hyperbolic signatures in the data, the host layer velocity was determined. This was used to obtain the apparent depth. 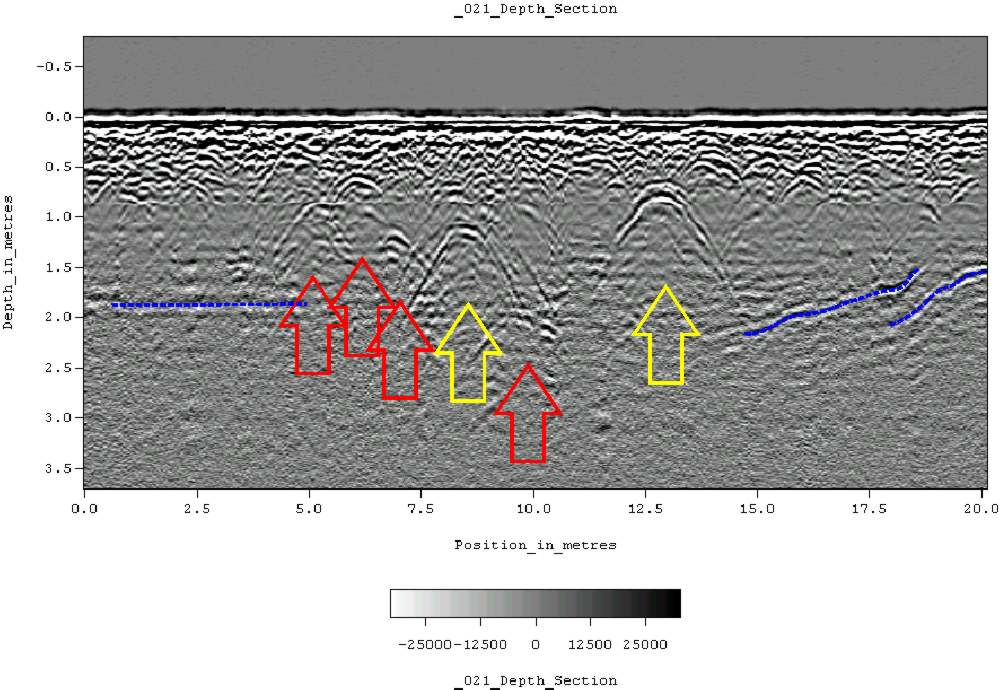 Setup: We would like to map the thickness and stability of a permafrost layer and identify key features.

Data: Radargram over a 400 m profile.

Processing: By assuming a propagation velocity of the speed of light, the two-way travel time was converted an apparent depth.

Interpretation: The topmost layer is interpreted as being comprised of frozen silts followed by frozen gravels and sand. Because rocky soils result in scattering of radiowave signals, data corresponding to the signal from the frozen gravel is noisy. At about 400 ns, we clearly see a well-defined lower boundary for the permafrost (mostly on the right). One of the most interesting features is found in the middle. We see a change in character of GPR signal where the boundary should be defined. This has been interpreted as an area where methane gas is bubbling to the surface.

Synthesis: The features in this radargram are much noisier and hard to interpret than previous examples. Boreholes were used to confirm the interpretation. Although penetration depth may have been an important aspect of planning the survey (due to scattering), a higher frequency survey may have provided more details near the surface.