Having decided that magnetic susceptiblity is a diagnostic property for our problem, the next step is to choose an appropriate survey. Designing an effective magnetic survey requires choosing the field instrumentation, as well specifying an adequate survey layout. Surveys over simple and complex scenarios are provided to highlight some of the possible complications encountered in real-life applications.

Further details about instrumentation are provided later in this section. For now it is only necessary to understand that magnetic instruments can measure: (a) the total magnetic field \(|\mathbf{B}|\). (b) an individual component of \(\mathbf{B}\), such as \(B_x\), \(B_y\) or \(B_z\) (c) a gradient of the magnetic field

Of the above choices, by far the most common is the measurement of the total magnetic field. However, the same principles of survey design discussed below apply to all of these measurements, in particular the total field anomaly datum which is the projection of the anomalous field onto the direction of Earth’s field.

A key component of any geophysical experiment is the design of an effective survey that can optimize the amount of information gathered with the least amount time spent in the field. Here are few important parameters to keep in mind:

These concepts are clarified below:

The area over which the magnetic data are collected must be of great enough extent to capture the anomalous signal. If only part of the signal is measured it will be difficult to image the causative body or structure. Fig. 37 compares two surveys over a dipping plane [ Strike: \(315^{\circ}\) , Dip: \(45^{\circ}\) ]. Both surveys used the same number of stations, hence the data acquistion cost would have been about the same. The example is small scale, with a plane being only 3 x 3 meters but the survey design principles do not change with scale of the object. 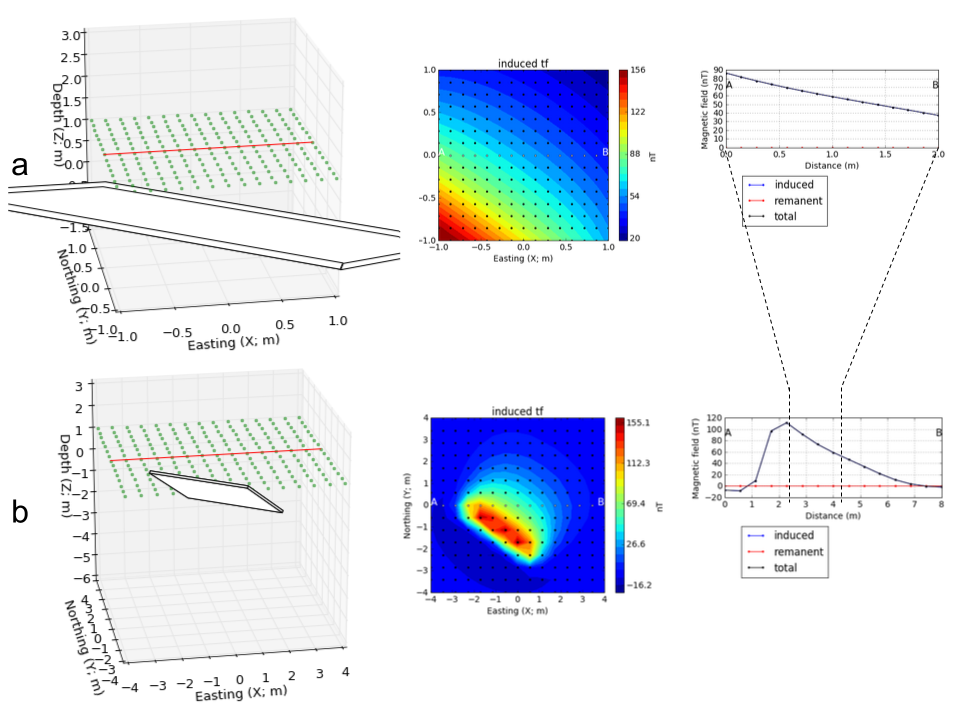 The sampling interval, or distance between observation points, is also important for a meaningful interpretation of magnetic data. Two surveys with variable station spacing over a magnetic rod are presented in Fig. 38. The data acquired at a lower resolution gives little indication about the orientation of the magnetic rod. Only when the sampling interval is decreased can we distinguish a linear feature striking at \(30^{\circ}\) N. 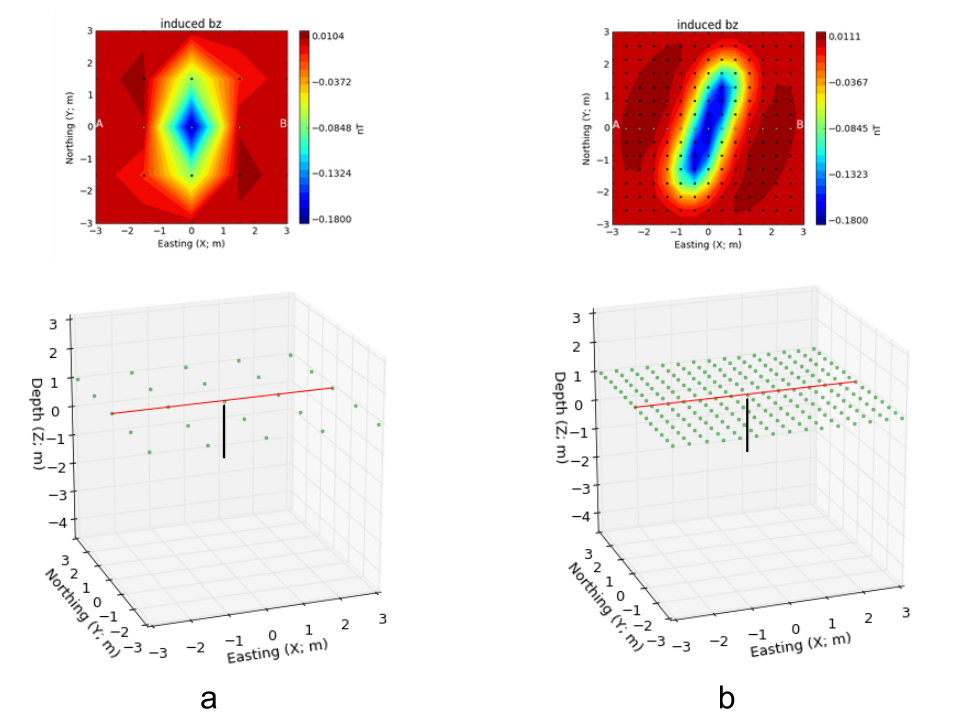 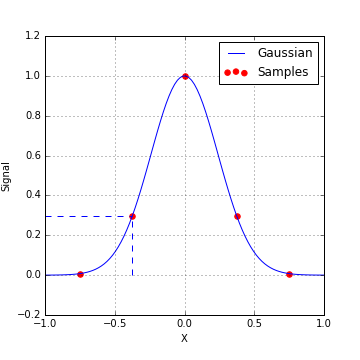 The above example illustrates a “General Rule of Thumb for Sampling Interval”: In order capture the details about the anomalous field, data should be acquired so that there are at least about 3 points per halfwidth of the signal. This is illustrated in Fig. 39. A more specific analysis, from a time series viewpoint, is that any frequency component of the signal needs to be sampled at least two times in each period. For our purposes, sampling the fields finely enough so that you produce the main features of the anomalous field is sufficient.

Student Exercise: Experiment with burying a prism. Using the magnetic_app, place the object at different depths and assess what your estimates of survey area and sampling interval should be. In preparation for a future exercise, look at the relationship between the halfwidth of the anomaly and the depth of burial.

An important component of the survey is setting up a base station. A base station is generally set up in the vicinity of the survey area, and away from known magnetic sources like powerlines. The magnetometer at the base station records continuously during the survey period and serves as a reference for later processing of the magnetic data where we attempt to remove the daily variations of the inducing field due to external sources.

Line profiles for a range of situations¶ 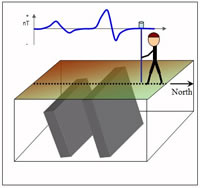 Magnetic surveys are (almost) always carried out over an area of interest. In some instances however the geology is 2D and hence a single line profile that is perpendicular to the strike of the geology contains the essential information about the buried bodies. The following examples are instructive in that they show how different such line profiles can be over different parts of the earth.

Recall that the anomaly pattern recorded over any given target depends upon latitude, target orientation, profile orientation, remanent magnetization of the target, and possible superposition of adjacent targets. To illustrate, here we show the anomaly recorded over two dykes buried at different depths. The dykes are assumed to extend to very great distances into and out of the page (they are 2D targets), and north is to the right (you are looking west), except in figure 3. The sketch to the right illustrates the situation. The figures below show how data over these dykes will depend on latitude, line orientation, target orientation, and so on. On the graph of the line profile data, note the changes in vertical scale as well as the changes in shape of the graph.

The concept is illustrated in the following eight figures selected with the buttons.

Here again are the data generated from the single block, the 5 blocks and the continuous Earth models:

The following table gives access to model, mesh and data files associated with these 3 models (uniform earth, 1 block, 5 blocks) for use with UBC-GIF modeling and inversion code MAG3D. The MeshTools3D program is used to view 3D models. The filename extensions will be understandable to those familiar with use of these codes. See MAG3D in IAG’s Chapter 10, “Sftwr & manuals” .

A measurement of the magnetic field at any location will involve either recording the amplitude of the field or one of its three components. Instruments are deployed on the ground, in the air (helicopters and fixed wing aircraft) and in space-borne geophysical platforms. Instrument types commonly used are outlined very briefly as follows:

Total Field magnetometers These instruments measure the amplitude of the magnetic field. The two most common devices are the proton precession and the cesium vapor magnetometers.

Some sensors can record the magnetic field in a particular direction and hence combining three of them in an orthogonal framework allows three components of the magnetic field to be recorded. A principle challenge in using these in field surveys is that the instruments need to be consistently aligned at the various stations. This means knowing the orientation of the instrument to within a small fraction of a degree. There are two main types of component magnetometers: fluxgates and squids. The fluxgates can be made small enough to be put into a borehole.

(Superconducting Quantum Interference Devices): These are very sensitive, and are currently more common in laboratories that work on rock magnetism or paleomagnetic studies. However, they are beginning to be used in the field, and more applications will become evident in the coming decade (2000 - 2010).